People who have cystic fibrosis and other chronic lung conditions suffer from frequent lung infections, often caused by Pseudomonas aeruginosa. Now, researchers from the University of Liverpool report that phage therapy could be a safe (and effective!) alternative to antibiotics for treating these patients. 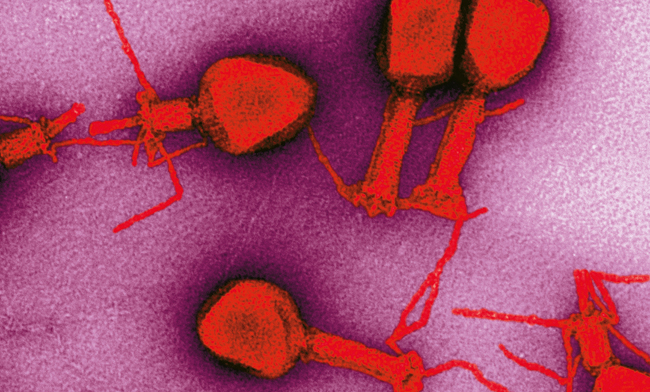 Cystic fibrosis causes mucus to build up in the lungs, creating a nice, cozy home for bacteria. According to study author Craig Winstanley, “cystic fibrosis patients face the prospect of life-long treatment with antibiotics, which often prove ineffective and can have side effects, especially when used for long periods. Hence phage therapy could be a particularly valuable addition to the treatment of chronic lung infections in these patients.”

Winstanley and colleagues improved upon previous work by testing phage therapy in a more clinically relevant mouse model of chronic (versus acute) lung infection. Their model establishes the lung infection by inhalation – the natural route. This contrasts with other studies that place agar beads containing bacteria directly into the lungs.

First, however, the group tested whether a phage called PELP20 could kill P. aeruginosa bacteria in an in vitro assay. The “artificial sputum medium biofilm model” resembles the environment of a lung with cystic fibrosis – there are free amino acids, mucin, and extracellular DNA. In this test, they saw a 3-log reduction in the number of bacteria after treatment with the phage, indicating that the phage is quite capable of killing the bacteria!

With this promising result, they moved on to the mouse model. They infected their mice with bacteria and, at different time points, treated the mice intranasally with phage. In all cases, the phage treatment completely eradicated the infection! As a control, they inactivated the phage with ultraviolet light – as expected, the inactivated phage did not affect bacterial growth.

Finally, they tested whether they could treat the infection with phage at an even later time point – up to 6.5 days after infection. Even in this timeframe, they achieved positive results – the infection was cleared in 70% of the mice, and the bacterial load was significantly decreased in the remaining mice.

According to the authors, “while there is still more work to be done in developing phage cocktails with sufficient range, these data suggest that phage therapy could be an effective therapeutic approach against chronic respiratory infections, either alone against antibiotic-resistant bacteria or in combination with conventional antimicrobials.”